Waiting in the Wings

Waiting in the Wings

If you were watching the World Cup on Sunday, you saw what the soccer world calls a wondergoal. In the 113th minute, late substitute Mario Götze receives a cross from Andre Schürrle and scores! The fact that both players were substitutes just proves the point that preparation + timing = opportunity. When I read how both ended up playing, I marveled:

“Götze, 23, had been replaced in the starting lineup after a disappointing start to the tournament, yet he rescued this match from the scourge of a penalty-kick shootout after entering in the 88th minute for forward Miroslav Klose, the all-time top scorer in World Cup history.Götze’s coach, Joachim Low, said he told Götze along the sideline to go out there and show everybody he’s better than Lionel Messi. But that was not exactly in the substitute’s mind when he scored the winner.

Schürrle may have only played in this match because starter Sami Khedira was injured in warmups, and then Khedira’s replacement, Christoph Kramer, was replaced in the 31st minute with a head injury.”

Both Götze and Schürrle were waiting in the wings.

Anyone involved in sports or dance/theatre, acting, etc. knows the power of those four words. Someone who is waiting in the wings has spent hours and hours preparing for their moment to put into practice everything learned “in the waiting room.”

Waiting is an Action Word

I’ve always been taught that waiting is an action word. So many teachers have used the example of a great waiter. He or she possesses many great qualities: 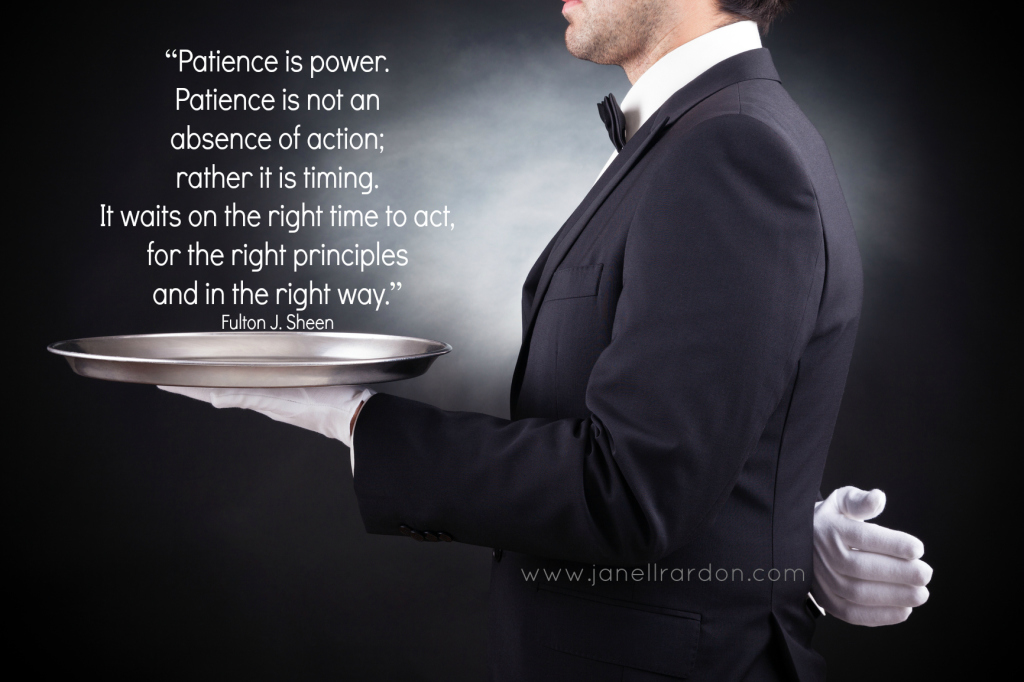 David was an “Active Waiter.”

As a young shepherd boy, David spent a great deal of waiting. His waiting room took the form of a pasture. While his brothers had been serving under Saul (and obviously learning some of Saul’s bad habits), David had been doing one thing—becoming intimately acquainted with God. Killing bears. Killing lions. Saving sheep. Singing melodies. Playing his harp. Writing worship songs. Learning to listen to God’s still, small voice. David had been set apart, in a seemingly menial task, according to his eldest brother (1 Samuel 17:28) to grow spiritually.

While serving the sheep, God transformed a mundane, obscure pasture into David’s school of the Spirit.

But one day, David, a young man waiting in the wings like Götze waiting on the sidelines of the World Cup, it was David’s time to shine. David’s time to put into practice all the years of training in the pasture.

David, in obedience to his father Jesse, ran fifteen miles from Bethlehem to the Valley of Elah, to deliver food rations to his brothers, who were serving in King Saul’s army. When David arrived on the scene, the Israelites were humming with horrid tales of a giant named Goliath, who had been taunting them, morning and night, for forty days. Flaunting himself before the army of Israel, Goliath obviously was a tool of evil—his bravado and pounding, pulsating voice resounding deep into the souls of the Israelites, provoking great fear and panic.

Imagine being an Israelite, listening to this intimidating, haughty, thunderous, frightening voice; causing you to intake of its nauseating diet for a steady forty days and forty nights.

Why, then, we must ask, didn’t David respond in panic or fear? Why didn’t he run away like all the other Israelites? Why, instead, did he run towards the frontline to fight? I can only surmise that David’s response is due to one thing.

How Can We Become “Active Waiters?”

Reading about David makes me want to become an active waiter. Use my time in the waiting room to prepare for whatever or however God is going to use me in the future.
So often, in God’s economy, training takes place over a long period of time—oftentimes, years before it is actually going to be put into use. Seemingly small, miniscule tasks are really very important. David triumphed over Goliath and the foes of darkness because he had been trained in the pasture—day in and day out—while no one was looking. While lying in the green pastures and spending time by the still waters, David learned:

Finally, David learned all about surrender. He learned that the battle was not his, but the Lord’s.

So often, in God’s economy, training takes place over a long period of time—oftentimes, years before it is actually going to be put into use. Seemingly small, miniscule tasks are really very important. David triumphed over Goliath and the foes of darkness because he had been trained in the pasture—day in and day out—while no one was looking. While lying in the green pastures and spending time by the still waters.

Maybe you feel like you’ve been waiting in the wings forever. Today, I pray you find hope and courage in the story of David, an Active Waiter, who embraced his time in waiting room. Like David, we must spend out time wisely so that when, and I mean when, our time comes, we will be prepared! Please share your stories and helpful “active waiting” tips with us. We are all learning so much!